Skip to content
Traveling with your surfboard in Panama is a bit of a hassle. Even for short distances, you have to change busses (mostly minibusses) a lot of times and usually walk between the stops. Every bus driver will try to charge extra for your board, so a lot of haggling is involved. Spanish helps. That being said, there’s a few pretty amazing surfspots and you will be able to rent boards in the better known spots (Bocas, Santa Catalina, Venao).

This one is pretty close to the capital (about 1,5 hours) and a good option if you don’t have much time or are on a long layover. There’s various beach breaks (mostly rock bottom) around here and a few options to sleep. Close-by San Carlos has the restaurants and supermarkets.

A beautiful bay dominated by Israelis with lots of acommodation options and a few restaurants (rather expensive). There’s only one tiny store in town, which is also over-priced. If you want to do some grocery shopping, do so before you get here in Pedasí (there’s two busses a day leaving for Pedasí). The beach offers various sand bottom breaks, so you won’t have to fight for waves. The waves range from nice beginner waves to pretty steep and fast, depending on swell direction and where you surf. Wind usually picks up in the afternoon, surf is much better in the morning. Waves close-out if the swell is bigger than 6ft.

Read about our stay in Venao here. 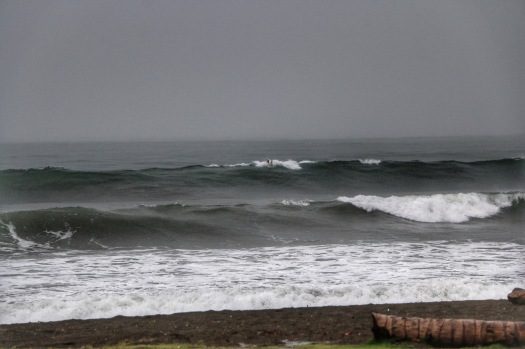 You can choose to either stay in the village, where you have the shops and a few restaurants, or you head out towards the beach. From the hotels there, it’s a 15-30 minutes walk to town, but you can usually hitch a ride. We opted to stay at the ‘Surfers Paradise’ out of town. It’s pretty basic, but has a good vibe and a communal kitchen. And the best view! You can watch the famous point break La Punta from the porch. The right-hand waves break over a reef and lots of rocks, so watch out. The paddle-out is also a bit of a workout. Generally, this is a spot for the more experienced surfers. It can hold any size swell. Locals are friendly, but they won’t miss a good wave just because you’re in their way… If this sounds too scary, there’s also a pretty sweet sand bottom beach break close-by. It’s about a 7-minutes walk from the hostel, on the other side of the river.

Read about our stay in Santa Catalina here.

Choose your island in this Caribbean paradise. We decided to stay on the main island Colón, where you have lots of hostels, bars and restaurants. If you stay in town, you can easily catch a boat to any of the various surf spots. On the main island, there’s Paki Point (reef break), Paunch (also known as Punch, reef break) and Bluff (shore break). Bluff is best left to Pros (or kamikazes), but the other two breaks are not exactly beginner-friendly either. The friendliest wave we surfed was on the neighbouring island Carenero. You can take a water taxi there. It’s called Black Rock and breaks just off the island. Careful when paddling out during low-tide, the reef is very shallow in some places. On the same island, you will find the better-known Carenero point break. We didn’t surf this left-hander. But it’s also a spot for the more experienced surfer and breaks over a shallow reef. Last but not least, you can head to the island of Bastimentos, which is a bit further away. We took a water taxi to the town and walked to the other side. If you don’t mind paying more, you can take a taxi all the way to Wizard Beach or Red Frog beach. If you walk, don’t take any valuables and head back home before it gets dark. There have been lots of robberies on the trail. In February 2017, a tourist woman was murdered. Ever since, there’s police patrolling the beach regularly. As for Wizard beach, the scenery is beautiful and it’s nice to have a sand bottom for a change. There’s absolutely no crowd, you’ll probably be surfing by yourself. It does get pretty messed up by the wind that picks up towards noon, though. We didn’t surf Red Frog Beach.

Water taxis to other islands usually cost around 1-5 USD.

Read about our stay in Bocas here.