Surfing is a familiar concept in Mexico, at least along the Pacific coast. We never encountered any problems transporting our surfboards on busses or taxis and weren’t charged extra. You should be able to find equipment to buy and rent in surf towns. Compared to all the other countries we’ve visited on this trip, these things are cheaper and there’s more to choose from.

Winter is not the best season for surfing in Mexico. You’ll find waves most days, but they’re often quite small.

Every surfer will sooner or later hear stories about this formerly sleepy fishing village turned surf mecca. It is mostly known for its monster tubes at Playa Zicatela (also known as ‚Mexican Pipeline‘). This beach break produces a very powerful and fast wave that tends to close-out. But if you catch the right one, you can have insane rides. If it hasn’t already become clear, this wave is not for beginners, but for experienced surfers only. Unless you happen to be here in winter, like us. That’s when smaller swells hit the coast. If you don’t mind eating a lot of sand and aren’t too attached to your board (the waves break in extremely shallow water!), you’re fine surfing here as an intermediate. Don’t forget to shuffle your feet, though, there’s lots of sting rays. Between April and November, leave this spot to the pros.

La Punta is the place to surf if you’re a beginner (or just not into steep and fast waves). It’s a left-hand point break at the Southern end of the 3km long Playa Zicatela. It would be a nice wave, but when we were here, it was pretty small and always insanely crowded. Lots of boards flying around, as this is where most surf classes take place. So watch your head and board!

When the swell is big enough, Playa Carrizalillo might work. This is a beautiful bay not far from Zicatela (a cab will charge around 35 MXP from Zicatela). It’s a beginner-friendly wave that breaks left and right. We did visit the beach, but there were no waves. So you’ll have to ask the locals for more info.

A local surfer also told us about a spot called Tierra Blanca. It should be about a 30min ride east from Puerto Escondido. We didn’t surf there, so this is all we can tell you about it. Just ask around.

Read about our stay in Puerto Escondido here.

It’s a bit complicated to get here, but if you have time, you should consider it. It’s a beautiful island surrounded by the Pacific on one side and a lagoon on the other side. The very long, curved beach has lots of breaks, but you’ll most likely be surfing the right-hand point break by the jetty. It’s a good wave for longboarders. If you have enough swell (which we didn’t), it connects through various sections and you can have a nice long ride. But even with very little swell, we had some fun and long enough rides. It’s a very mellow, beginner-friendly wave that breaks slowly. It doesn’t get crowded, at least not when we were here. There are lots of strong currents in the bay. If you don’t want a power workout, choose your entry spot wisely.

If this wave is too mellow for you, there’s other breaks in the area. We discovered a deserted beach nearby with pumping waves. But you’ll have to find that one yourself.

There’s no ATMs here, so bring enough cash. You can buy wifi in some shops.

Read about our stay in Chacahua here.

This is a very pretty town in a bay with rather calm waters for swimming and snorkeling. It’s probably not your best pick if all you want to do is surf. Which isn’t to say that you can’t. Obviously, we were there the wrong time of year. In summer, with enough swell, the left-hand point break at Playa Las Gatas should work. You can either walk there from town (a bit over an hour) or take a boat (2 USD for a round-trip). As this was not an option for us (little swell), we headed to Playa Las Escolleras, which faces the open ocean. A mini-van takes you to the Marina for 12 MXP (60 cents), which takes about 20 minutes. From there it’s a short walk to the beach. You can either surf the beach break of Playa El Palmar, or the right-hand point break that is created by the jetty. We were able to catch a few waves (we had a 2-3 ft swell), but unless you’re really starving for some surf, it’s not really worth it when it’s this small. The waves were pretty steep and fast and broke in very shallow water. Another beach that was mentioned to us more than once is Playa Linda. As we didn’t surf it, we can’t tell you more about it. Same goes for Playa Larga.

If you’re staying in town (the other option being Ixtapa), there are very well-stocked surf shops where you can buy anything you need.

Read about our stay in Zihua here.

This pretty stretch of beach is a good pick if you’re a longboarder. For shortboarders, you need quite a bit of swell to really be able to play around in this mellow wave. We heard it gets really good once it’s past head high. Generally, this reef break (mostly left-handers, occasional right-handers) needs a bit more swell. As a reference, the forecast when we were here said 3-5 ft with 19sec intervals, which in other spots can be quite big. Here, the set waves were no bigger than chest-high and not very powerful. It’s a bit of a paddle out to the line-up, so you’ll be well warmed up by the time you reach it. It does get quite crowded. There’s usually some surf schools out, as this is a very beginner-friendly wave (at least while we were here). The crowd is mostly North American, you won’t find many locals. They must have their own spots. Extra tipp: If you paddle out in front of Esmeralda (which is a bit further), you don’t have to worry about the reef and its inhabitants. It’s sand bottom there for the first stretch.

There’s quite a few places along the beach where you can rent boards for 10-15 USD a day. And there’s even a small surf shop that sells the basics, though we never figured out the opening hours and always encountered it closed. We also met an American guy who lives here and repairs any dings. Note that there’s no ATMs here. One restaurant (Lourdes) sells expensive wifi. You’ll have to head to Los Llanos for cheaper internet or any grocery shops.

Not too far from La Saladita is The Ranch. It’s less protected and therefore offers more powerful waves. You’ll need a good car to get there, as the road is in bad shape. It’s about a 40min drive. Another option is going there by boat. A fisherman will surely take you. But that does cost 150 USD per boat, which fits five people. We didn’t surf there, as we don’t have a car and couldn’t spend that much on the boat.

Read about our stay in Saladita here. 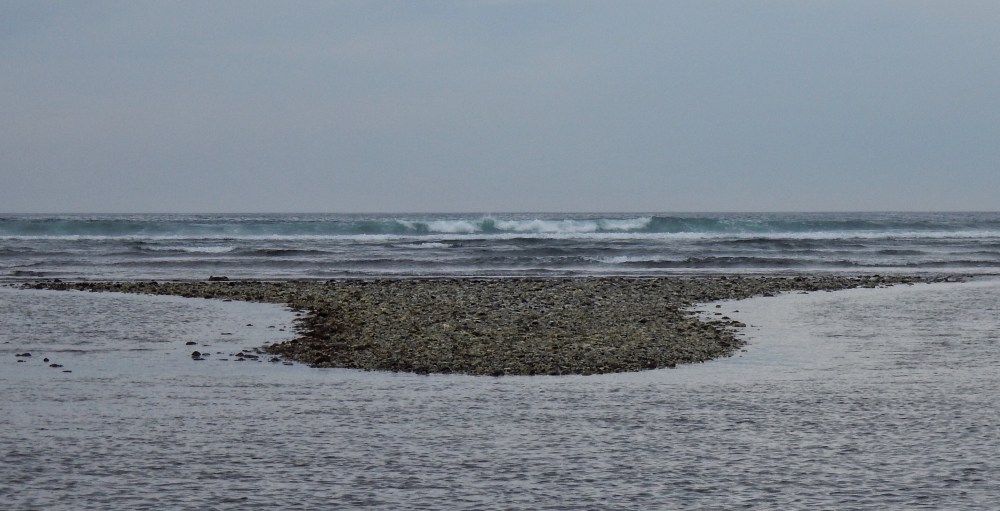 The secret spot that is no longer a secret has suffered a bit. Apparently, this wave used to be much better. But a storm in the fall of 2017 shifted everything around. As a consequence, the wave is no longer an A-frame, but only a left-hander breaking by the river mouth. We were told that it no longer connects the different sections but now has various peaks. As we didn’t catch any huge swells, we can’t tell whether that’s true or not. For the time we were here it was true. Still though, this wave is easily the best we’ve surfed here in Mexico so far. The rides are long enough and great for intermediate to experienced surfers, depending on swell size. Unfortunately, it’s also pretty crowded and the vibe in the line-up is not always so good. The bottom is rocky, but you can easily walk on the rocks. If you surf low tide, it can get quite shallow in places. The water didn’t seem all that clean most of the time. There’s quite some algae and a bit of a smell. It’s quite likely you will see some whales and dolphins while you’re here.

Accommodation is very basic here, but you’ll get your own cabana with kitchen for very little money. There is a few places that just offer rooms, but we wouldn’t recommend that. There’s very few restaurants and it can be very hard to find a dinner.

There’s no ATMs here, the closest one being in Lázaro, a 1,5h bus ride away. It is possible to get money for a commission in a shop in close-by Caleta. Wifi can be purchased in some shops and works quite ok. But you’ll be here to surf the waves, not the internet. And they won’t disappoint.

Read about our stay in Nexpa here.

This little town, which is actually called San Francisco, is generally known as San Pancho. That’s the name of the beach break. It’s a spot with a wave that is anything but easy. It’s sucky, builds up quickly, has a steep take-off and breaks pretty close to shore. Be prepared for the washing machine and quite a bit of sand in your hair. Contributing to this rather special experience are the pelicans and gulls. They fish like there’s no tomorrow – in the middle of the line up. It takes some getting used to 4-kilo-bombs splashing into the water right next to you. The water is quite a bit cooler than down south. In winter, depending on how easily you get cold, you will need something between a longsleeve lycra and a spring shorty.

The town itself is very pretty with a hippie touch. There’s plenty of really good restaurants and nice souvenir shops. Everything is notably more expensive here, though.

Only ten minutes away by car is Sayulita. This town has practically exploded over the past years and is now a party hotspot, with a little bit of surf on the side. The wave is very beginner-friendly and always crowded with flying softtops. What really put us off, though, was the incredibly smelly river that carries all its waste into the sea right next to the surf spot.

A bit further away and closer to Puerto Vallarta are the beach break La Lancha and the right-hand reef break Burros. Unfortunately, it’s very complicated to get to these spots by bus from San Pancho. Local surf shops do provide transportation. But they charge 25 USD per person for the quite short trip.